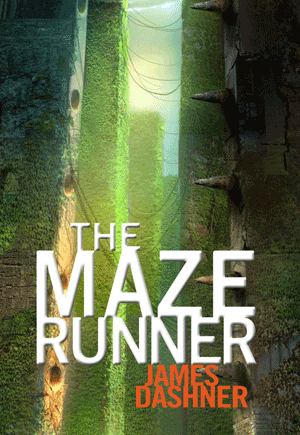 James Dashner’s New York Times Bestseller, The Maze Runner, recently was adapted to film to join the other dystopian young adult franchises that are becoming increasingly popular. The Maze Runner follows a group of boys stranded in a place called the glade with no knowledge of who put them there, only knowing that one new boy comes up once a month, along with supplies so that they can live. None of the boys have any memory of who they were before they arrived in the glade. The only things they’re sure of are their names. Surrounding the glade is the maze, which has walls that change every night so it’s almost impossible to find a way out. There are “runners” who spend all day running the maze and mapping it, and trying to find a way out, which is where most of the action of the plot comes into play.

While I’m personally not a big fan of science fiction or dystopian literature, this is definitely one of my favorite books that I’ve read this year. James Dashner has an interesting style of writing that focuses mainly on the action of the storyline, and in that sense is very fast-paced and exciting. There isn’t as much focus on emotion–explicitly, at least–however, that is not to say that the characters in the novel don’t have some interesting relationships that really make the book more than just a non-stop action story.

The main character, Thomas, is the newest boy to arrive in the glade (and thus nick-named “greenie”) and is very curious about the maze and how the boys still haven’t found their way out. Yet it’s very clear from the beginning that something sets Thomas apart from the other boys, and that he’s going to bring a lot of change to the glade. This rings true for both the book and the movie adaptation. I don’t think that Thomas was the most likeable character, especially since at first his actions seem a little unwarranted and dangerous. Dylan O’Brien played him in the film, and I personally think that he did a great job of portraying the character, especially in the ending scene.

One of my favorite actor’s representations of a character was Thomas Brodie-Sangster as Newt. He was definitely one of my favorite characters in the book as one of the more level-headed leaders, which was a stark contrast to some of the more irrationally-thinking characters. He seemed very headstrong yet caring, and seemed like the warmest character on screen, personally. Other actors such as Ki Hong Lee as Minho and Blake Cooper as Chuck really did a great job of bringing life and diversity of personalities to the film.

The basic story is the same for both the original novel and the film, however a lot was changed for the adaptation. Yet all of it feels natural, and the heart of the story is still present. While there probably wasn’t a single scene that wasn’t altered in some way, it all makes for a much better movie. If the plot was taken directly from the book without changing it, it would have been too confusing for a sub-two hour film, especially without Thomas’s internal monologue to help clarifying some points. The “mystery” of the maze is much simpler in the movie, yet some of the action scenes are amplified to be more intense, so overall, it evens out. One of the changes that I was very supportive of was the change in Teresa’s character. She’s the only girl in the glade, coming up shortly after Thomas, and she spent the majority of the book in a coma. Even after she awoke, she was oddly trusting of Thomas and their initial meeting seemed rather strange to me. In the movie, Teresa is much more wary of all the boys, seeing as she has no idea where she is, and takes to a treehouse to pelt them with items from up high. She’s also very cautious when first talking to Thomas, and this seemed like a much more realistic situation (despite the book in itself being the opposite of realistic).

Both the film and book leave off in a place that concludes the storyline well, but leads into the sequel and leaves the reader/watcher wondering what’s going to happen next. (The boys behind me in the theater were already talking about the release date for the next movie while the credits were rolling, so it’s fair to say that it left the audience wanting more.)

What sets The Maze Runner apart from so many other dystopian novels is that Thomas is thrown into a world that he knows nothing about, yet has no memory of anything before it. Meanwhile, in many  other dystopian stories, the character knows all about he twisted world that they live in and can sometimes go on for pages upon pages describing it. Even if the world-building is done through gradual exposition, readers might get confused with all the information. The Maze Runner does just the opposite, in which the reader is finding out about the world just as Thomas is, and ultimately it takes the entire book to accomplish that. In this way, there’s a sense of mystery to the book, leading the reader to make predictions about how they got there and what the way out is.

Overall, I would give the book a four and a half out of five stars, and the movie about a four. I think they need to be looked at separately, but I do encourage people to read the book before they see the movie because it does add more depth to the characters who we only have a short time to get to know on the screen. I would recommend the book to all kinds of people, including those who usually only read realistic fiction, like me. It’s a very universal book that isn’t a very difficult read, and I believe this is part of the reason it’s had such a widespread approval.