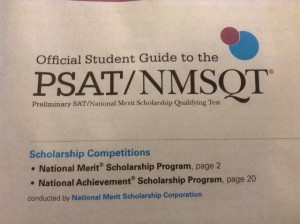 Within the past month, 16 of Ward Melville’s students were recognized as National Merit Scholarship Semifinalists, placing in the top five percent of all the students across the nation who took the PSAT in 2013.

When asked about how it feels to be a semifinalist, Adina Nawaz stated, “It feels nice. I wasn’t surprised, but I was happy. The past scores determining semi-finalists for each state can easily be found online, so if you got a score higher than the normal cutoff score for your state, you kind of get an early hunch as to whether or not you qualified.” Other semifinalists also were appreciative of the recognition, but not entirely shocked.

Nawaz also studied in advance, starting in sophomore year. “Because SAT and PSAT questions are of the same type, I knew that studying for the SAT definitely helped me a lot on the PSAT,” she said. Nawaz continued, “It gave me a first taste of the SAT-type testing environment, even if it was shorter than the actual SAT. You get to see how much you are able to focus in that amount of time and you are then able to build upon that for the actual SAT.”

The questions are similar, but the PSAT is much shorter than the SAT. Sander Zhu explained, “The main problem is the PSAT contains no essay and is a lot shorter – two aspects of the SAT that are a pitfall for many students.”

Many of the semifinalists suggest to the juniors taking the PSAT in a few weeks to practice, not stress too much and get enough sleep the night before. “Study now instead of later, because you retain the skills and familiarity with the test when you eventually take the SAT,” shared Donald Della Pietra. Nawaz emphasized, “Practice, practice, practice. Practice really does make perfect, especially when it comes to standardized testing. Do as many practice questions are possible, and read the explanations to the answers.”

Being relaxed about the PSAT was advice given by most of the semifinalists. “Don’t sweat it!” Zhu stressed. “Don’t pull an all-nighter either; it’ll hurt you more.”

While studying is critical to performing well on the PSAT, Felix Wang emphasizes not overdoing it and not stressing a lot. “I have seen way too many people prepping for standardized tests in class when they should be learning the material being taught,” Wang shared. “The things you learn in the classroom today could be very helpful, and potentially life changing.”

Congratulations to these 16 students on their achievement, who have proven their readiness for college next year not only through their PSAT results, but also through their wise advice for those students in their junior year right now.