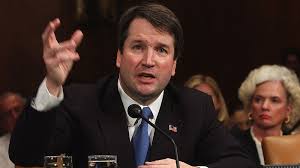 On July 9, 2018, President Donald Trump nominated Judge Brett Kavanaugh to the Supreme Court to fill the spot of Justice Anthony M. Kennedy’s position in the Supreme Court. However, Kavanaugh was not appointed to the court without issues along the way.

Christine Blasey Ford, a professor of psychology at Palo Alto University, accused Judge Kavanaugh of sexually assaulting her when they were teenagers. What followed was a tense and emotional hearing between the Senate Judiciary Committee, Kavanaugh and Blasey Ford. Ford was quiet and shaky as she delivered her testimony, the opposite of Kavanaugh’s angry and emotive testimony. The American public will never know whether the incident, which Ford claimed and Kavanaugh denied, occurred. However, whether or not Kavanaugh is guilty, these hearings revealed the true character of Brett Kavanaugh.

In this high stakes hearing on September 7, 2018, Kavanaugh delivered a clear opening statement in which he denied the allegations by Ford. He seemed collected and prepared as he spoke about his family and his past. However, as the hearing continued, his patience dwindled and he became angrier with every question the Democrats asked him.

He talked back to them and asked them irrelevant and plain rude questions. For example, in response to Senator Amy Klobuchar’s question about whether his drinking ever caused him to be unable to remember events, he said, “You’re asking about blackout. I don’t know, have you?”

These accusations may have hurt Kavanaugh’s reputation and his family, but it is not an excuse for someone to act in this way. Yes, he probably was angry and upset that his name was being tarnished, however, he is a future Supreme Court Justice, and this is no way to represent himself, and show the American people, that he should be on the court. These allegations showed the true character of Brett Kavanaugh, who, on October 6, 2018, was confirmed onto the Supreme Court.