A Spoiler-Free Review of “Beauty and the Beast” 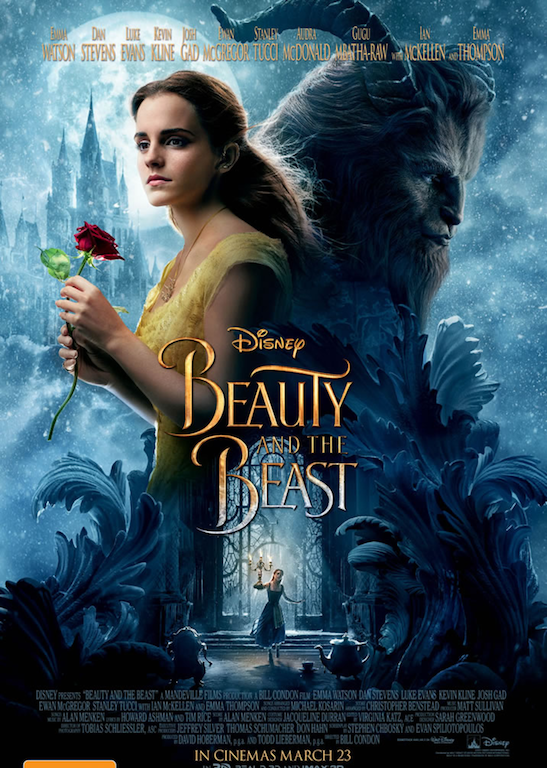 Even though it was released only two weeks ago, Disney’s live-action film of “Beauty and the Beast,” directed by Bill Condon, has already become the current #1 movie in the world. The highly anticipated remake of the 1991 animated film upholds many aspects of the original movie while adding a modern twist, catering the updated version to the contemporary generation.

One of the most notable aspects of this live-action movie was its impeccable cast. Played by Emma Watson, the new version of Belle is sure to be just as remembered as the animated princess. Bringing this iconic character to life, Watson portrays Belle to be much more independent, intelligent, and stronger than in the original movie. Dan Stevens, who plays the Beast, recaptures the role perfectly. Through his gruff voice, Stevens recreates the Beast’s temper and sensitivity. Luke Evans wonderfully executes his role of Gaston, the main antagonist of the film. Evans is able to portray Gaston as the pompous and greedy villain as seen in the animated movie. But perhaps one of the most remarkable roles in the live action film was Josh Gad as Le Fou. Gad’s vibrant energy and extensive vocal range may be what makes his character so likeable. While some were concerned about the Le Fou being gay, the scenes hinting at his sexuality were quite subtle and added a modern flare to the character. Additionally, many of the actors/actresses who voiced the characters of the furniture did an incredible job; Emma Thompson as Mrs. Potts and Ewan McGregor as Lumiere were both spectacular in their musical numbers of “Beauty and the Beast” and “Be Our Guest.”

While there were many parts of the film that were outstanding, some details could have been better executed. For instance, some of the green screen effects, particularly in the scene where Belle runs out into the field, looked a bit unrealistic and overly edited. Similarly, many think that Emma Watson’s singing voice was too autotuned. Some also believe that other actor or actresses would be better fit to play some of the characters. Additionally, some of the new plot changes such as Belle’s knowledge of the curse, are controversial, as some think it adds to the modern take of the film while others believe that the producers should have stuck to the plot of the original animated film.

However, the majority of the new film absolutely stunning. This modern adaptation puts a fresh perspective of the classic animation while perpetuating so much of what fans loved about the original. The new film adds new spins on the plot, providing explanations for unexplained inconsistencies. The updated characters are given more depth, and many of their actions are much more believable than in the animated movie. The soundtrack of the movie incorporated classics from the animation, including “Belle,” “Gaston,” “Be Our Guest,” and “Beauty and the Beast,” and added new songs such as “How Does a Moment Last Forever” and “Evermore.” These songs are beautifully performed in the movie, and some of these tunes were also incredibly sung by more well-known artists: Ariana and John Legend recreated “Beauty and the Beast,” Josh Groban performed “Evermore,” and Celine Dion, who was featured on the 1991 track of “Beauty and the Beast,” recreated “How Does a Moment Last Forever.” Additionally, the visual details are phenomenal. The costumes are accentuate the characters’ personalities and are extremely well thought out. The set designs bring the original story to life by incorporating elements from the animation as well as adding new embellishments; for example, the Beast’s castle is especially impressive with its ornate decorations.
Overall, the new live-action film of “Beauty and the Beast” encapsulates the well-loved facets of the 1991 animation while expanding upon them. While there were some scenes that didn’t feel as well-executed as others, there were so few of these moments that they do not harm the entire greatness of the movie. This enchanting take of the “tale as old as time” is sure to be as momentous as the animated classic.